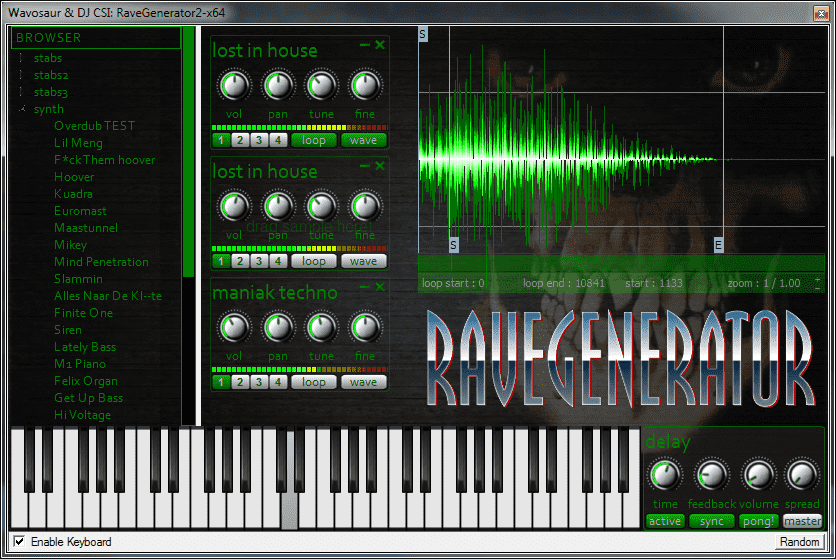 Rave Generator 2 : Back From Hell !

Everybody should know the first version of the famous RaveGenerator VST plugin : a rompler with a lot of funky rave stabs/samples coming straight from the 90’s, for the late-to-the-party, here’s the link with full description : https://blog.wavosaur.com/rave-generator-vst-free-90s-stab-synth/

Now the version 2 is ready and full of improvements :

The plugin is available in 32 & 64 bit, it comes with a user guide in PDF format.

If you like and want to encourage, don’t hesitate to donate anything you want 🙂 =>

AudioUnit
Unlike the VST/AU Speek, this time i didn’t code the AudioUnit “from scratch” but used the incredible Symbiosis VST / AU from NuEdge : http://nuedge.net/article/5-symbiosis
a big thank to the author !

There are still some limitations / small bugs, please read the user guide & FAQ text.
I’ll fix that in next release. I’ve also planned to add some features (most wanted is the “drag and replace” sample).

Here’s some more famous samples origin for all the old school rave loverz !

Here’s a “YEAH” sample that ended on the famous “Zero G Datafile 1 CD”
then from here it was used in TONS of rave tunes,
you WILL recognize immediately, listen to the intro of :

the famous “yeah” in:

The 2 Ulimited Get Ready 4 This stab !

here’s a short sample with some of the jingles :
250 discojingles

and cut all but the last stab before the voice =>

Let’s load the short stab into the funky sampler and GO! Get Ready To Paaartay !

this is probably that record that was sampled for those rave hits from the 1992 :

and they maybe all have sampled the stab from the famous Nitro Deluxe tracks !
unlike the Inner City stab, it’s not found on the original mix but on the “dub” mix, right at the start

The real origin of the “Landlord” stab : https://www.gearslutz.com/board/electronic-music-instruments-electronic-music-production/990794-i-think-i-found-real-origin-landlord-stab.html

Sequal – Not Too Late Dub

The screaming aaaaaah in Cameo Money

this one was sampled and used with great effect on the Cameo – Money (Reese remix) and many other rave songs ! like Blame – Music Takes You.

and now go back to the studio and make some f***cking uptempo records !

129 thoughts on “Rave Generator 2 VST / AudioUnit : the stab machine is back in the house !”