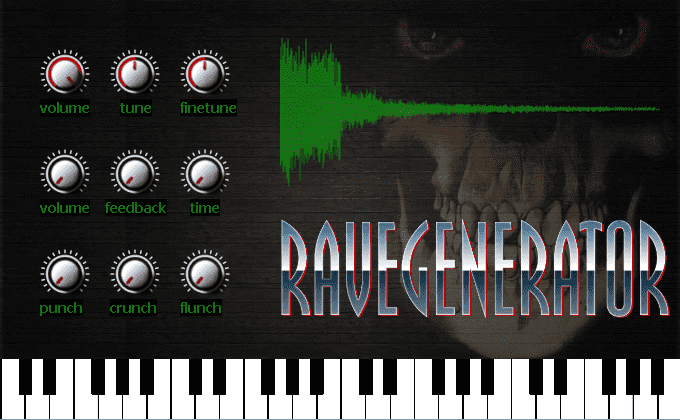 Rave Generator VST by DJ * CSI * is a free rompler VST synth, containing many of the classic sounds of the early rave / hardcore from the 90’s.

Revelation of a new order !

Rave to the house

Get Ready 4 This brass Synth

this beat is technotronic

Get Ready For the Euromasters

All the cheesy cliché sounds are here 🙂
Well, not all sounds in my opinion, i miss some of the most used and cool sample (like the Casio CZ organ), but i already asked DJ * CSI * for a V2 !
He asked us to host the plugin, so you can download it right now.
It’s freeware and VST2.4 compatible!

We already hope for a V2 to come very soon, we asked for some improvement and more sounds.
Don’t hesitate to make your suggestions too!

The “stab” is a short sampled burst of sound, it can be sampled from many sources (often from another record) : one classic technic is to sample a chord and then play a one finger melody with the keyboard !
Here’s some well known sample stabs and their origin :

Sampled from the last seconds of “Nitro Deluxe – Let’s Get Brutal”, this where it started !
here’s a video showing how to do :

Coming from the 1989 track “Landlord Feat Dex Danclair – I Like It (Blow Out Dub)“, it has been sampled and used to death in a lot of house / rave / techno / dance / hardcore tracks

TEKNONUTTER @ discogs attempted to compile as many of the tracks that use the “Landlord Stab”, here’s the list : http://www.discogs.com/lists/The-Landlord-Stab-1989-1993/154266

this one can also fit in that list ! => http://www.youtube.com/watch?v=qaaAOyal8Oo

A typical orchestra hit, probably derived from the ORCh5 Fairlight sound. The one used in Quadrophonia – Quadrophonia probably comes from the intro of the 1987 track ” 16 bit – Changing Minds “.

Some like it, many hate it, and this was a big hit.
The famous rave choir sample comes from a Roland S-330 sample disk coming with S-330 system disk, it’s called “Ending”, it’s a good old orchestral sample with a 30.000 Hz samplerate!
Another famous sound was sampled from the end of ” Electric Light Orchestra – So Fine ” track

The funky chord stab as heard in “Bizarre Inc – Raise Me”

The funky stab ! starting right at the beginning of the track :

It comes from this ultra super funky track : ” D Train – You’re The One For Me (Special Dub Vocal Edit) ”

Right at the beginning !

This – annoying ? – snippet of vocal was used on countless dance & techno-rave-dance tracks.
Of course it comes from an accapela => ” Tramaine Hawkins – In The Morning Light ”

This acapella was present in the famous “Acapella Anonymous Vol. #1” bootleg
this vinyl + the Zero-G datafile sample disks + the Korg M1 Synth are responsible for at least 75% of the electronic music of the early 90’s 🙂

This short “woo” sample was used in many rave / dance track too. It comes from the intro of ” Iggy Pop – African Man ” track :

You can hear this “woo” sample in :
KLF – Last Train To Transcentral
A Homeboy, A Hippie & A Funki Dredd – Total Confusion
Westbam – Monkey Say Monkey Do
Total Groove – Reanimator https://www.youtube.com/watch?v=AIC5ylwgFtY

Todd Terry is the king of the sample, his incredible stab was re-used in so many song that we can’t list. Yes, this sound, starting @ 0′ 6″

According to jim01_78, the famous sound was sampled by Todd Terry in “Sequal – Not Too Late Dub”
I have to check in my freestyle tracks collection to check that !

The Bizarre Inc piano chord stab in “Playing with Knives”

It has been sampled from this 1989 track : ” Fidelfatti feat. Ronnette – Just Come Touch Me (Hallelujah Mix) ”

Here’s the video that show it :

It’s funny to notice how the 1989 track samples the Tramaine acapella ( “Sing Hallelujah!”)

Don’t forget to check the other videos from Ry Kennon => https://www.youtube.com/user/RealRyKennon/videos